FREYJA, the one who chooses the slain... 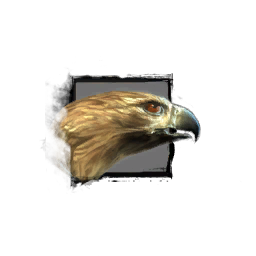 Freyja was daughter to sea-god Njördr and twin sister to love god Freyr, all of whom were part of the Vanir, a less warlike, divine family. As part of a hostage exchange between warring families, Njördr and Freyr were sent to live with the Æsir. The connection between the divine brothers and sisters and their common creative power, in which the Vanir believed, was morally reprehensible in the eyes of the Æsir and had to be dissolved after the war between the two tribes. Freyja is worshipped as the goddess of love, erotic love, magic, as well as a destructive goddess. On a chariot drawn by cats she travels across the sky and to bloody battlefields. As the goddess of war, she acts wisely and superiorly, following ingenious strategies. Freyja is a skilled fighter. She becomes the goddess of death when she chooses half of all fallen soldiers on the battlefield. Sometimes she also rides a fighting pig, a boar with golden bristles called Hildiswini, who may be her transformed brother Freyr.
Into the modern period, Freyja was treated as a Scandinavian counterpart to the Roman Venus in, for example, Swedish literature, where the goddess may be associated with romantic love or, conversely, simply as a synonym for "lust and potency". In the 18th century, Swedish poet Carl Michael Bellman referred to Stockholm prostitutes in his Fredman's Epistles as "the children of Fröja".
Freyja and her afterlife field Fólkvangr, where she receives half of the slain, have been theorized as connected to the valkyries, where it is said of Freyja that "whenever she rides into battle she takes half of the slain", and interprets Fólkvangr as "the field of the Warriors". Just like Odin, Freyja receives slain heroes who have died on the battlefield, and that her house is Sessrumnir (which she translates as "filled with many seats"), a dwelling that posits likely fills the same function as Valhalla.
Still, we must ask why there are two heroic paradises in the Old Norse view of afterlife. It might possibly be a consequence of different forms of initiation of warriors, where one part seemed to have belonged to Óðinn and the other to Freyja. These examples indicate that Freyja was a war-goddess, and she even appears as a valkyrie, literally "the one who chooses the slain".

_______________Due to numerous similarities, scholars have frequently connected Freyja with the goddess Frigg. The connection with Frigg and question of possible earlier identification of Freyja with Frigg in the Proto-Germanic period (Frigg and Freyja origin hypothesis) remains a matter of scholarly discourse.
Like the name of the group of gods to which Freyja belongs, the Vanir, the name Freyja is not attested outside of Scandinavia, as opposed to the name of the goddess Frigg, who is attested as a goddess common among the Germanic peoples, and whose name is reconstructed as Proto-Germanic *Frijj?. Similar proof for the existence of a common Germanic goddess from which Freyja descends does not exist, but scholars have commented that this may simply be due to lack of evidence.______________

_____________________
I have lots of WvW Skirmish Claim Tickets and got the brand new Mist Lord's weapons for it. With new weapons I did a styling overhaul for my guardian (maybe post it later), but my beloved Norn would almost be displaced by human/Sylvari presentations anyway... So today my Norn Ranger as (Valkyrie) Goddess Freyja. According to tradition, as soon as Freyja puts her falcon robe around her shoulders, she rises into the air like the lightning-fast falcon. The robe enables the goddess of love to fly around unseen in all worlds and to observe the events. As the goddess of love she "may" also show some leg, because there is hardly any choice for leather class, I decided for Viper´s part. Armour is almost exclusively white, only a few details are highlighted with different gold tones. I also tried falcon feathers (a bit brown) for Raven Mantle, but that didn't convince me. Maybe because white shines and supports the divinity. I didn't find a similar look here, Winged Headpiece (like Raven Mantle) is almost exclusively used by heavy or light class, so I found it interesting to create a medium look.
I hope you like my northern goddess
_____________________
Screens on other maps: https://imgur.com/a/9xJ8X7i
_____________________
Weapons: Mist Lord's Greatsword & Mist Lord's Staff