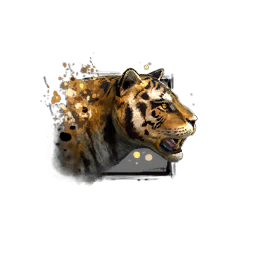 "Headed for the tiger dens? Beware. There is a wild woman who calls them home. The norn who see her say she’s an incarnation of Tiger - one of their Spirits of the Wild, they say, exiled from the mountains. We think she is one of Ameyalli's spirit warriors. But nobody can be quite sure. The single thing that every sighting of her has in common is that massive, gleaming bow that summons tiger spirits around her… " - A hylek scout
----
MY FIRST LEGENDARY!! I DID IT *EXCITED SCREAMING* (too bad Chuka's gonna be bugged forever in the specify armor tool)
That. Was. Amazing. Expensive, but amazing. I know I've been spamming looks lately, but hey, who doesn't want to show off their first legendary? ;)

Notes:
- Thank you to Elessar for weapon and screenshot location ideas, and to Hylek for encouragement!
- I also did some research and got some weapon skins that closely resemble actual ancient Indian weapons. (This was another reason I used some of the weapons Elessar did.)
- Jaya and her pets all have Hindi names. ("Jaya" means "victory.")
- Thank you to the random GW2 blogger on Tumblr who discovered that this tailor backpack makes a great tiger sling!

Pics taken in Caledon Forest (at the tengu wall), Tarir, Lost Precipice, the Ossan Quarter of Divinity's Reach, and the Desert Borderlands. Cover/character select pics are not enhanced.